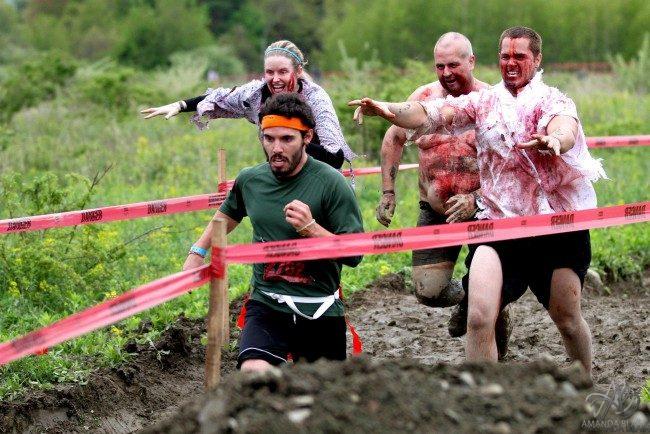 Run For Your Life from Zombies… for real

All across North America the zombie fad is taking hold, from AMC’s The Walking Dead to news and media using the term any chance they get. The latest fun thing I’ve seen is this super neat idea called Run For Your Lives – Zombie races! What’s a zombie race you ask?  If you are a runner expect a 5k obstacle course including rough terrain, huge up to your waist pools of fake blood, slippery walls to climb and of course being chased by thousands of zombies. If you are a zombie, expect to be transformed into the part of the undead. Makeup artists to do the gore makeup for you…. Including costumes, face wounds, sunken eyes and tons of fake blood.

The runners have generally 2 or 3 “health flags” that they wear around they waist as they make their way through the crazy course, dodging the zombies who claw for their flags as they go.  The pictures look intense with teams of runners and zombies working together to accomplish their goals. Less than 20% of the people who run the race make it to the end “alive” with at least one of their 3 flags remaining. There are usually concerts, food, camping and beer afterwards. Sounds like an awesome geeky time. Maybe i’ll join the one in Toronto area in September. Would you be a zombie or a runner?

Zombies never says You Only Live Once

Geek Birthday For the Win Thank you Internet!

*The Most Interesting Cat In The World Says…*

*The Most Romantic Thing I May Have Ever...

*Get Mad Then Get Over It*

*How You Picture Yourself In a Zombie Apocalypse*

My wife did this last month, she had a blast.

Zombie … if i was a runner i would get too scared ….. freak out and possibly behead zombie pretender with the large hatchet i carried just in case real zombies had infiltrated the pretenders……..

the dude  in the middle is really in character…….lolz!

Ok that would freak me out!

Huge market out there for it..That is for sure.

Thanks for the post. I want to try this.

My husband and I as signed up to do the run in Washington at the beginning of next month. Can't wait, it'll be so much fun.

If I was still living in Canada, I would have loved to sign up for the one in Toronto   🙂

A coworker was just telling me about this.  Any more, I would need actual zombies chasing me to complete a 5k

oh god, so much win.

I would like to experience this from both perspectives. Fun either way.

Zombie . . . to bite runners after cath them LOL

Are the runners allowed to bring machetes and cricket bats?

It would be funnier if there were zombie flash mobs at real marathons . . .

Totally would be a zombie on this one. =)

Wow it seen like a good way to run

This is awesome! I'm no runner, but I tried to convince my boss to participate…

Totally doing this in October!!

Drove down from montreal for the Run For Your Lives in Boston, was a ton of fun!

I heard about this! I wanted to join but I thought you had to pay some amount that sounded too expensive for me. Sounds like fun though. I'd probably "die" hahaha

I would be a runner!! It sounds fun!

I'm doing it. Colorado, this Saturday. I can't wait.

Have fun! Oh don't get yourself killed.

Waiting for it to come to Phoenix! Or is LA next year….when I'm not preggo. They give you a life belt with flags and the zombies pull them off.

+Amanda Blain This may very well be the only thing that could ever:
a) get me to run, and
b) crap my pants in terror