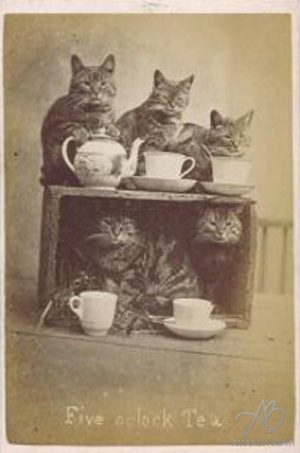 The History Of Caturday

Why are all these cats in my stream every Saturday? Because it’s Caturday Folks! But just what IS the furry friend holiday all about?

Caturday has been around since roughly 2006. For some perspective that’s older than the public version of Facebook, Twitter and almost as old as You Tube. The tradition is pretty simple. On Saturdays, people on various websites, (starting with 4chan and gaining mass popularity on site “I Can Has Cheezburger”) people would post pictures of cats with funny text know as “lolspeak”. Lolspeak is a type of broken English, generally grammatically incorrect, almost a type of “baby talk”, that can often included well known internet memes. This adds to the humor as you can sort of imagine the cat speaking in that “child like way” to explain the situation it is displayed in.

Putting cats in funny poses with funny text actually dates back to the 1800’s such as the example “Five O’clock Tea” below from photographer Harry Whitter Frees.

Caturday is a fun, cute way to express a very old internet tradition. So why not partake? Create your own funny lolcat picture and share with G+!

How Many Geeky Themes Can You Spot

Geek Birthday For the Win Thank you Internet!

*The Most Interesting Cat In The World Says…*

*The Most Romantic Thing I May Have Ever...

*Get Mad Then Get Over It*

*How You Picture Yourself In a Zombie Apocalypse*

is not caturday…
is #revangeofthefifth

+Amanda Blain thanks for explanation still dont like it though LOL

I have nothing against Caturday…I do hate they "talk" like that. Sorry. I envision my cat with perfect grammar.

Oh, +Amanda Blain – I LOVE YOU. And so does +Caturday!

And knowing is half the battle. Apparently the other half is cat pictures, but still.

This needs to be a "The More You Know!"

+Joseph Lee Y U NO CIRCLE CATURDAY? I LUFF YOO

+Amanda Blain TENK U FOR CIRCLING ME!

+Caturday I have circled you, my body is ready

So life without cats is meaninless…

i so love cats

Then again maybe not lol

This "Caturday" thing makes me think there's no hope left in humanity.

+Soso Perez SoSo's my nickname too!

Lolspeak is not grammatically incorrect! It just has a different grammar.

The whole Bible has been translated into lolspeak, see http://www.lolcatbible.com/index.php?title=Genesis_1

The site has pages explaining how to translate between English and lolspeak, see http://www.lolcatbible.com/index.php?title=How_to_speak_lolcat

I'm attempting to appeal to the masses +Wayne Radinsky 🙂 and to the average new user.. the 'spelling mistakes' turn a lot of people off caturday.. I'm informing thats part of the culture/fun :)?

Oh, so I'm just being a 'cat grammar nazi'