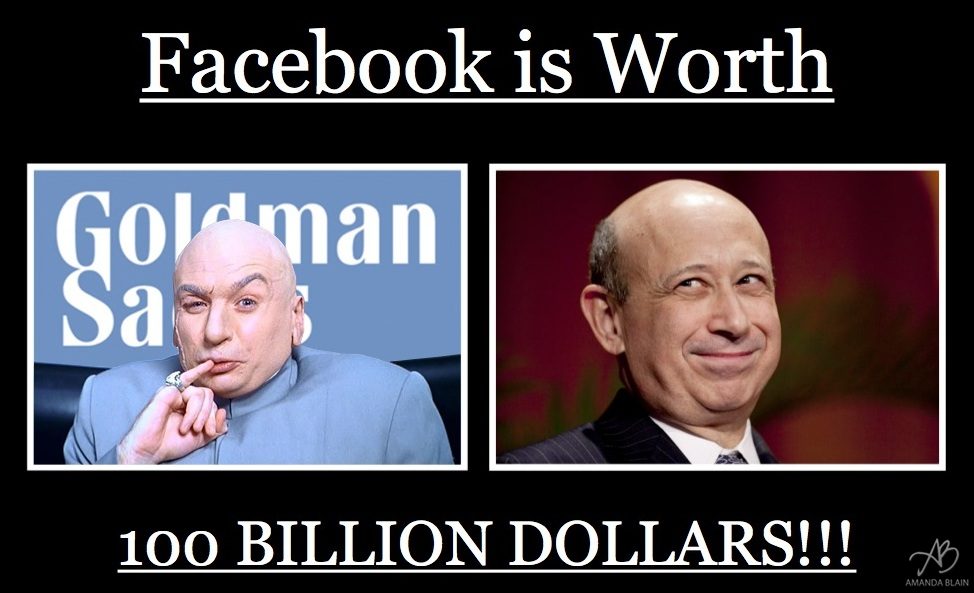 What Facebook’s IPO Has Taught Me About The Stock Market

I am by no means a stock market professional. I've looked into learning about it a few times here and there, but I've really paid attention to the Facebook IPO. Watching the errors made by the technology giant is pretty much a "do not do these things to your tech company" learning lesson in stocks for me. I'll repeat I am not an expert.. but this is what I've taken from the experience… 🙂

• Do not over value your company when your numbers do not back it – Facebook's valuation was roughly 100 times their previous years profit and way higher than other tech companies.. Like Apple or Google… who also happen to actually make way more proven profits.

• Do not over sell your company when your numbers are already inflated – Facebook increased the number of shares 25% just before it launched… A strange idea considering the stock was already over valued and the previous points I just mentioned. This would cause people to sell when the stock didn't work out because they got "more than they wanted".

• Do not do insider trading in any way.. If the legal system somehow lets you go, the other investors will not – 57% of Facebook Inside members sold. Typically its about 10% from insiders. That's a big number difference in the stock world. Insider trading went rampant, legal investigations have begun and a good portion of the other 'regular guy outside' investors, got spooked and sold too.

• Do not annoy your big advertisers when you are about to go public – When a large company like General Motors pulls out publicly from supporting your company at the same time, you've just driven the nail in the coffin of anyone who was on the fence with the previous points.

Facebook needs to somehow justify its 100 Billion Dollar Valuation. It needs to figure out its mobile platform, which so far even almost 4 months later is still no further along.

Facebook has lots of options it could do at this point, subscriber models, premium features(like featured posts or special new features) . A paid model even? Would most humans shell out 10$ a year to keep their account open? Maybe they will do something massive with Instagram. But will any of these be accepted or received by the 8 year old audience?

Currently it will have to continue to plague its audience with advertising and more than it is right now. A fate that happened to once social network giant –  My Space. How long before users switch to other, less cluttered social sites  – Google+, Pinterest, Twitter, Foursquare to name a few?

Here are some recent articles you can have a look at to learn more about this too:
http://www.forbes.com/sites/nathanvardi/2012/07/27/mark-zuckerbergs-big-facebook-mistake/
http://en.wikipedia.org/wiki/Facebook_IPO

Someone Will Still Hate Peaches

Oh my. Hahaha. Thanks for the good laugh. 🙂
(from the picture)

the guy in blue is dr.evil in austin powers

Oh, I saw this. They are going to be releasing a "Facebook" phone at some point.

I thought the phone was this year?

I think they are going to release their second one because the first was a flop.

omg that itallic was killing me… ugh :P.. all better 🙂

+Amanda Blain You're spot on.  Unfortunately the FB whizzers lacked solid council like yours, and stepped all over themselves in a sordid display of ineptitude.

I would hope they have thought about how to reverse the blunder, though, the "paid model" idea seems a bit like……extortion.  "Pay us $10, or else!!"

I say they need to improve on most of what they are currently doing. Make your product good before being risky, or most people will hate it. Hell, Most people only use it for their friends not because it's "Good"

I don't see them going to a paid model. People would probably drop it like a sack of bricks if they did that. Also, they say in their privacy policy that they'll never charge to use the service.

Hi Amanda, nice article. I enjoyed reading it. 🙂 I as well have been following Facebook as well even before their IPO.

I wrote this article about Facebook as well:
Another thing just to clarify:

“Do not do insider trading in any way.. If the legal system somehow lets you go, the other investors will not – 57% of Facebook Inside members sold. Typically its about 10% from insiders.”

Insider trading is illegal. It’s when insiders have been given information that is not available to the public. This is not what happened. Employees of Facebook have a window to legally sell their shares, which is what they did. It was their right to sell their shares. You would as well with the ridiculous valuation on the company.

Yup… but as stated.. their advertising model currently is not working… everything they try… its not working.. 🙂 10$ per the average FB user per year.. would be a heck of a lot of profits.. 🙂

Facebook IPO was a setup… Mark got screwed, other bank investors.. IPO is the fastest and easiest way to sell your interest in a company…A smart investor would have known social media will always change.

FB just simply is not worth $100B in any rational framework.

I am watching with interest since FB stock found the cliff and went over, and it has apparently not landed yet. Down >6% yesterday, down close to 4% today.

they need to make google + harder to use

But if everyone did move to an uncluttered social network, might that network get just as cluttered as Facebook down the line?

Since the Facebook app is so shitty all they have to do is smack an advertisement in every time someone loads up the Facebook app. I usually log into mine about 5 times in 15 minutes when its having a bad day so there's 5 ads straight off the bat!

i use myspace for musica lol

Nope. I dont see Google putting advertising here.. which has been backed by several high ups in the company. They dont really need to.. Google makes money in search.. Lots of it. G+ just ties all the Google pieces together in one nice account 🙂

Facebook doesnt have that luxury. Their one page is all they have to make money on. They need to make you click on ads to keep it going.. and who wants to do that when you just wanna see what your friends ate for lunch or pictures of your high school friends babies? 🙂

+Amanda Blain  Google is profiting from the information acquired from Google +… So they can produce better advertisement.. 😉

so fast cause no one uses it

Being publicly owned, the stock holders expect a profit… taking the spam to a new level.

But going forward search isn't the future, at least that's what I hear, and so they say no advertising in the future, but what's to keep them from changing their mind and making social their cash cow, and moving a away from search more?

Sure   … but i dont mind that.. I like targetted relevant ads… Woudnt that be a novel idea? I see pictures of products I might actually be interested in ..  in the ads instead of generic You are single? Here is a dating site Ad…  like FB does… I have never clicked an add on FB except by accident… I click on google ads a bunch of times cause the results are what im searching for…  how about the rest of you? 🙂

+Amanda Blain  I guess that makes more sense.. Both positives and negatives in that.

That is exactly right. Even now, when I try to look at a friends pictures, they now have a whole new sidebar of ads in that popup as well.  Personally, if it weren't for my daughters being on FB, I would be gone instantly. If my real friends want to get in touch with me, they all have my email address, they can text me, or <gasp> even call me.

This is giving me ideas on a new advertising concept… Advertising has yet to be perfected, and I believe we just found a loop hole here.

Google and search? After 16+ years of data dominance + Android proliferation + emerging social network (G+ has healthy growth numbers) anyone who has used the GoogleNow feature in JellyBean…now THATS the future, Google knows you so well it will predict which "ad" you want to and dont want to see, …so the question is…if its super relevant and useful to my life and pops in at just the right moment? Is it still an "ad"? ….i think it has elvoved beyond that…its perfectly timed useful information that i actually wanted    hmmmmmm….Just my shiny pennies ;P

Google will never stop being the largest search engine in the world. They may branch out further. i.e Android, G+ etc, but they would be retarded to drop what their company was build on. That would be like Kelloggs not making cereal anymore in lieu of making cameras.

But search could be less of a priority then it is now, that's what I'm saying

One of the issues of targeted ads – we redid our counters in the kitchen and baths, so I looked at about a thousand faucets. Job has been done for months, but I'm quite sure I will be seeing faucet adds for the next year.

The model of targeted ads is great. Relevant to my life, instead of carpet bombing with everything trying to be sold. it allows the manufacturer to reduce their expense on advertising, which should translate into better prices. It just needs to evolve.

I agree with that . The longevity of previous searches needs to be reworked. I still get ads for stuff I have long since moved on from.

Yes   I bring that point up to anyone who says they use fb to get in touch with friends… They never like it 🙂 I call or text my friends.. and im LONG done 8 years of stalking high school people i dont care about…

agree… GoogleNow is pretty technology. 🙂 Im not late for my meetings anymore 🙂 ehhe

It's OK +Amanda Blain. I don't believe the experts are very expert either.

Yes, my only problem is that I live in a different state as my daughters and they are still young. (12 and 18). To them, FB is still where it's at, unfortunately.

It really depends on what the intent was for going public. If the intent was to maximise the payout to Facebook before things started to go sour, then the IPO succeeded spectacularly.

If the motive was more typical of the normally stated reasons for an IPO, i.e., a cash injection into the company to fuel expansion, then Facebook is in a whole lot of trouble, as additional investment is now going to be difficult, if not impossible, to come by.

It all depends where they invest now… Instagram was a very smart investment.. Maybe Twitter is next, unless Apple buys them out.