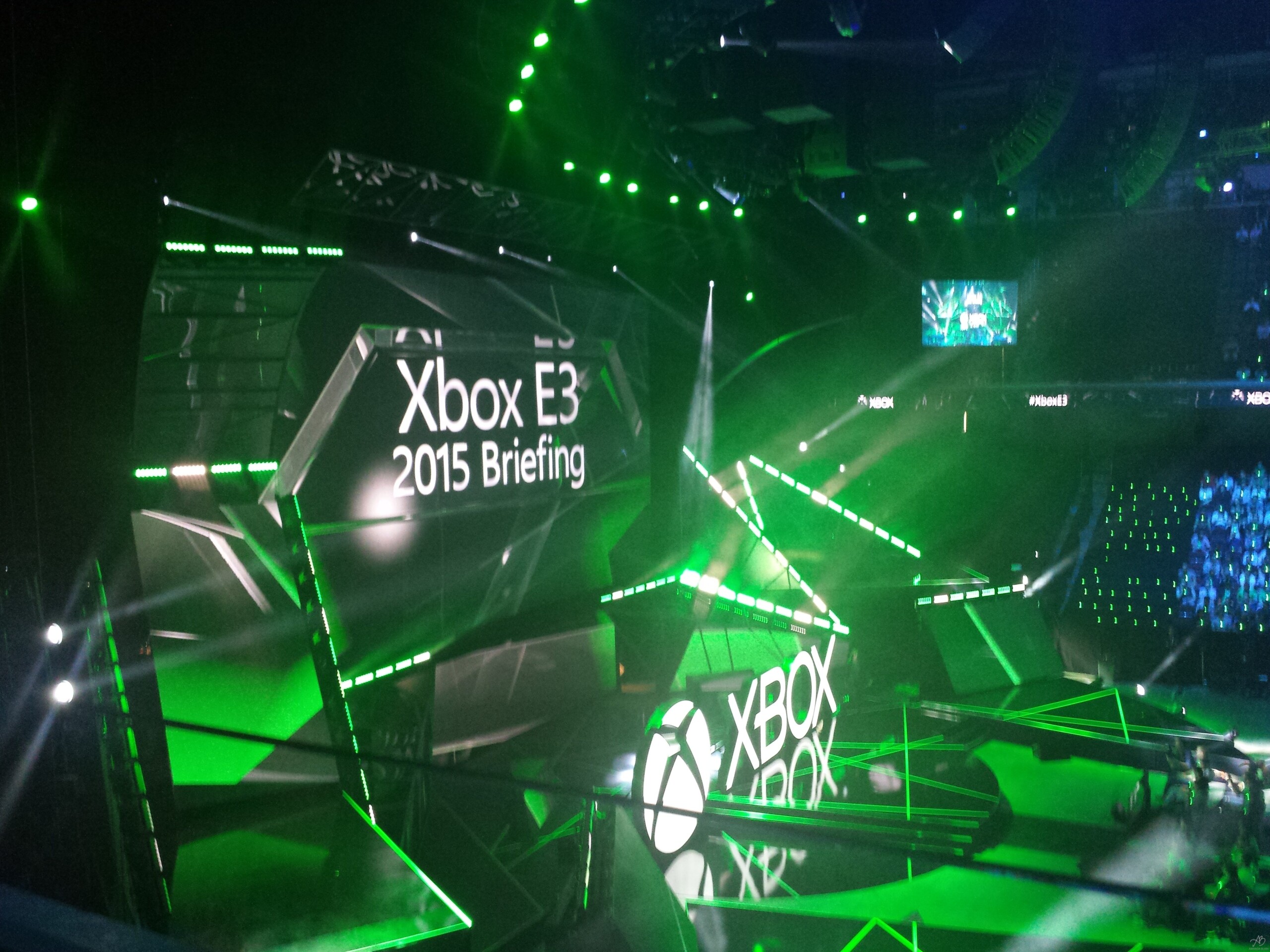 It’s that time of year again. E3 is in full swing and my experience started for the second time again with the XBOX press conference! If you haven’t had the pleasure of attending E3 before,  perhaps a bit of setting the scene for you yes?  Xbox has their press conference several blocks away from the main convention center. A mad dash of geeks and gamers descend on this area and the line up begins. After a quick bar code confirmation scan this year we received an “amulet”.And the waiting begins. It’s a really fun line up experience because you never know who you will randomly be standing beside. Famous YouTuber? Check. Top twitch streamer? Every other person.. Head Microsoft executive? They are all there.  And you all wait together.

Soon you get shuffled in and take your seat. Magically i got placed in the exact same row as I did last year. Front upper level! The entire place is very green. Very green. And the amulet you received blinks and glows green and other colors in time to what they are presenting on stage. Last year was similar but it was bracelets. Its hard to not be super excited when surrounded by thousands of people who are as excited as you, about finding what Microsoft Xbox is coming out with this upcoming year.

And then the show begins.

This years announcement were pretty freaking amazing. First and foremost. Backwards compatibility. You will be able to play your XBOX 360 games on your Xbox One by the holidays.  No hardware updates firmware updates! It seems all developers have to do is allow this option. There were hundreds of games already available with more every day. And the super awesome part? BOTH digital and physical copies of games will be able to be imported. This makes the lovely new 1 TB XBOX console that was just announce so appealing! If you haven’t upgraded yet, you should. I’ve heard several people talk about why XBOX waited so long for this to happen… and quite simply I think this is to dominate the next quarters. Ball is in your court now Sony, and we will see what you announce later today!

They also previewed a New Elite Xbox controller that has swap able pieces to it. I’m personally looking quite forward to this as depending on which game I play i’d love the flexibility to customize the grip. Not quite sure why this took so long!

A few game announcements that were expected. Fallout 4 looks beautiful.. and a nice announcement that PC mods will be available on XBOX one. Microsoft mentioned and pushed Windows 10 a ton. It will be a nice experience moving ahead to see how well everything all plays together.

A really amazing demonstration was the Microsoft HoloLens device playing minecraft. Microsoft had hooked up the camera to the device so we could see what the guy was seeing. He first started off by playing regular minecraft against the wall. Which was neat. NO screen required, and portable entertainment for all. But then.. Hologramrific! A simple “create world” while looking at a table and bam! There was his minecraft world in all its glory! The best part was seeing this played live with the other player on the stage. You can play with your friend just like you can in real minecraft, and you can see the full 3D layout of the world. Its really amazing to see live like this and I expect a lot of games in the future to take hold of this technology.

Other games worth noting. A new part of the Gear franchise… Gears 4.. With a new main attractive blonde character. I have to say there didn’t seem to be a whole lot of new here, except some great close up details of monsters jumping on you, but i’m not disappointed by that. The familiar music played, the Shuffle run still existed and the chainsaw was still there. It was exactly what I wanted to see and look forward to some new surprises over the next 2 years.

Son of theives also looked interesting. I’d not heard of this before now but having a bunch of characters with green MMOish names floating above their heads and PIRATES from Rare… is about all I needed to see to keep that in my to look at loop.

All in all, some very interesting announcements from Microsoft Xbox this year at E3 2015. Lots more coverage of this amazing event to come!

The Difference between APU, CPU and GPU