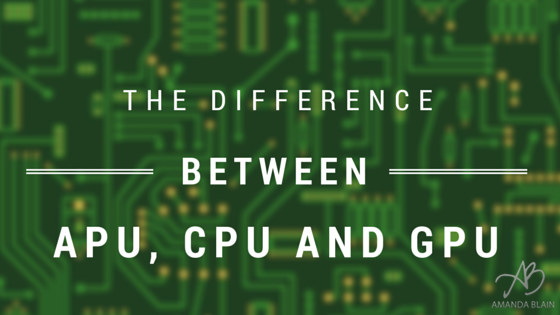 The Difference between APU, CPU and GPU

Have you ever wanted to put together your own custom PC but felt a little intimidated? As someone who has grown up with computers, purchased and put together my systems since good old XT computers in the early 80s'(with my dad’s help!)… I can assure you that there is nothing quite like picking out the pieces of your perfect desktop system.

Although I love gaming on consoles, there is also something to be said for the mouse and keyboard PC gaming that can’t be beaten. Although possible, you likely won’t be doing that on a laptop. Many seem to be intimidated by the ‘hardware’ side of building a computer, but there is nothing to fear, but fear itself. Part of the confusing part is the acronyms that are involved in the core part of the system. So let’s start there…

Picking the Core of your Computer system

Part of designing a Custom PC is first picking your budget.

Then you need to decide exactly what you are going to be using the PC for.

Once those two things have been decided, try and get the most bang for your buck. Don’t get warped into a battle of brands or fanboy results on FPS frame rates, if you are just going to occasionally play a game you want to visually enjoy. There are 3 options used to make up the core parts of your computer system. Some are old, some are new.

Check out the difference between APU, CPU, and GPU.

In days past there was one…CPU. A CPU is the chip that serves all your essential processing needs. The CPU is basically the brain of your computer. It loads the operating system, executes commands, or performs calculations in excel. Games demand a lot of pull from the CPU. CPUs can have many cores or just a few.

The weakness of a CPU is its linear data processing. That basically means they do tasks in one by one singular fashion, one at a time. CPUs are sometimes referred to as microprocessors. A microprocessor is a set of circuits that actually connect the CPU to the rest of the computer(the housing around the actual CPU Chip), but today the terms get used interchangeably.

This is what gives you graphics and video on your screen.

Computers technically can function without a GPU but you won’t be able to connect a monitor to them. GPUs are dedicated cards you plug into your motherboard, or your motherboard can have a graphic chip built right into it.

Most high-end gamers will get a separate GPU for their system. GPUs are monsters at number crunching. They use Parallel processing so they can do many tasks at the same time. That’s what is needed, as showing graphics on your monitor involves billions of calculations per second. The amount of cores a GPU has depends on which manufacture you go with.

APU is the Hybrid of the above CPU and GPU.

AMD exclusively uses this title for its products. These chips mix a CPU and a GPU into one. Because they mix the two, they are able to handle medium desktop usage as well as gaming quite well.

The unit will use CPU serial linear-based tasks when required, or a GPU parallel processing when required. They also include improved power efficiency.

That means in something like a laptop, that has an APU, it will have better battery life than a CPU typically. The APU is designed to give you a good frame rate for gaming and good computer power at a fraction of the cost of getting a separate high-end CPU and GPU.

The AMD 7850K APU for example can run online games( like League of Legends, DOTA, or Counter-Strike)  at high to medium settings. It can even play something like Battlefield 4 on low to medium settings. The people who feel that a “laptop might be enough” might want to have a look at an APU desktop system setup.  APU is a good way to get a “desktop feel” while perhaps saving you some money.

This video from AMD really explains this APU visually better than my words could with an easy “making 10 sandwich” example for 2 minutes of your time.

Most of Intel’s product line now includes a CPU mixed with a GPU. Intel refuses to use the AMD-specific “APU” term we just learned, so they have their own name for the same thing. CPU with Integrated Graphics.

So there you have it! You now are a little more educated about the difference between APU, CPU, and GPU and the different pieces that can go into the core part of your computer system.

I am a member of AMD Red Team Plus. There is zero compensation for this post. These are all my lovely thoughts.

Cool Tech You Likely Didn’t Hear About From...

What is the difference between LED and OLED...