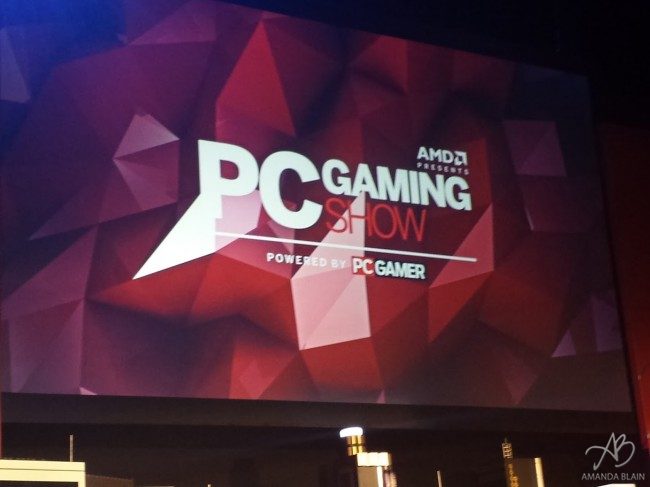 Pc Gaming Show. Xbox, Nintendo, Playstation and even game developers for quite some time have had fabulous displays at e3, showcasing their upcoming line up for the video game year. Pc gamers, had to look on and wait. But not this year. For the first time in history PC had a press conference at E3. The show was put on by PCGamer and was sponsored by AMD and several others. It was full of amazing interviews and chats with many gaming super stars.

Who was at the PC Gaming Show At E3?

Quite a few speakers made the stage…

And if you think thats a big list… it was. That’s a lot of people to have some questions with and to get through.

Several gaming companies launch their world premiers at the show and we saw lots of lovely trailers including Hitman, SOMA, Fable Legends, Deus Ex: Mankind Divided and Beyond Eyes to name a few. A regular theme of the show was the discussion about early access for PC usage.

Head of Xbox Phil Spencer was one of the first guests and he had some announcements about Microsoft and the world of Pc Gaming. He admitted that Microsoft had “lost its way” with PC Gaming. A solid move by team Microsoft with their refocus announcement and emphasis on Windows 10. They included quite a few previous Xbox only console games that are  coming to Pc…

An Interesting announcement to me from the PC gaming Show was well first of all, Xbox being at the show!  Xbox becoming one with PC gaming is a huge step in the video game world. They stated that gears of war, long since the exclusive Xbox experience would be released on PC. Interesting to see the line between console and PC blurring. I look forward to checking out Gears Of War – Ultimate Edition on PC. Ron Fergusson talked about how there will be 19 multiplayer maps and quite sunning visual overhauls in the game. Killer Instinct will also be entering the PC stage and was announced here.

No Man’s Sky a previous Playstation only exclusive will also be released on PC as announced by Sean Murray.

A game I can say I invested too much of my time into earlier in life was Roller Coaster Tycoon. I was happy to see Frontier gaming announce they are picking the series back up with their 2016 launch of Planet Coaster. Checking out their site it looks like you can purchase same game extras we often see on kickstarter. Like having your name etched into the park or creating a unique you character in everyones game. The trailer was cute for sure and a bit lighter fair to a lot of heavier releases.

Amd released their new Fury series of Cards by AMD’s very own CEO Dr Lisa Su.  I had the privilege of meeting Dr Lisa the week before at AMD HQ with AMD Red Team Plus. Dr Lisa had an amazing presence that filled the room. She was technical and knowledgeable about any questions that AMD Red Team Plus asked her, and you immediately got that she had a real sense of purpose and direction for AMD.

On stage at the PC gamer show was no different. Dr Lisa presented well the new line of fury cards and there was even a ‘security drop in’ by the Corporate Vice President of Corporate Marketing – Ron Myers.  He brought in the new dual core Small PC that everyone is talking about – Project Quantum. This dual core all in one box computer solution sure looks sexy! AMD unveiled The Radeon R9 Fury X  which is liquid cooled and AMD Radeon R9 Fury  which is air cooled. These video cards use their new Fiji architecture with High-Bandwidth Memory (HBM) technology. Because of this they have been able to design smaller and simpler cards. At the end of Dr Lisa’s speaking she held up the first public showcase of the still in development dual-GPU card.

I was hoping for more reasons why PC gaming is something to watch out for. Although there were lots of interesting interviews and developer announcements, I wanted to see more hands on demos, like we saw with Strafe.

Unfortunately, at an already packed conference, this event went on way too long. 2 and a half hours at the end of a long filled E3 day was just a bit too much. Host Sean Plott, joked at the start that they invited lots of guests and none of them turned the offer down. That became very clear as guest after guest hit the stage.Several of the publishers repeated announcements from earlier in the day too. Although awesome announcements and games, the repeat wasn’t required.  Most of the news reporters around me pensively looked at their watch frequently. There is so much to go through at E3, that i’m sure the show can trim some of this off and make for a better streamlined event next year.

All that being said, I enjoyed the laid back nature of this conference. Watching developers and stars, crack jokes with the audience and display the passion for their projects with Sean was a nice pace change from the rehearsed LOOK AT ME of the other press conferences.This was not a press conference to appease stock holders or commercial buyers. It was an enjoyable Show and I hope we can see it again (a bit shorter!) Next year!

I am a member of AMD Red Team Plus. Thoughts an opinions are my own and they did not compensate me for this post.

Windows 10 #UpgradeYourWorld and Your Computer