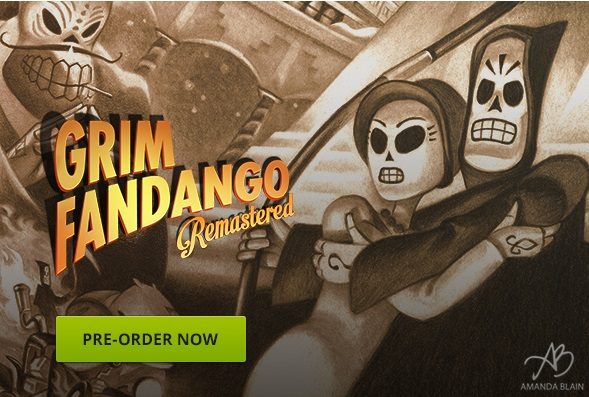 Grim Fandango Is BACK!

GoG has finally received the go ahead for pre orders for the cult classic that so many have loved, Grim Fandango.

For those new to the series or who need a refresher Grim fandango is a dark comedy adventure game from 1998. It was made by the classic studio Lucas Arts. In a similar style to Loom, Maniac Mansion, and Secret of Monkey Island, Grim Fandango allows you to talk, interact, and point and click your way through a compelling dark story.

The story is based upon Mexican folklore, set in the land of the dead. It follows Manuel (Manny for short) Calavera. Manny works for the department of death (DOD) and because he lived a not so great life. DOD employees have to help newly departed souls make it to the ninth underworld. Manny attempts to save the girl, Mercedes “Meche” Colomar. Glottis your lovable driver pal, also rounds out the cast.

Sadly many say the lack of  “commercial success” of Grim Fandango lead to the adventure game department shutting down at LucasArts. BUT WHY! This classic had great story and game elements in it. And it was dark. Very Dark.

A remastered version of Grim Fandango was announced during Sony’s press conference at E3 2014, and is being developed by Schafer’s current studio Double Fine Productions. You can now preorder at Gog.com

Here are some classic Grim Fandango Quotes so you can get in the mood.

Manuel Calavera: My boss is always giving me these motivational sales books – “They Bought the Farm, Now Sell Them the Cows”… stuff like that.

Manuel Calavera: Much as I would like to, I just can’t bring myself to jump into the giant pit of uncleaned kitty litter.

Manuel Calavera: Glottis… Glottis… is that a German name?
Glottis: Oh, no. My roots lie not in any Earthly nation’s soil. I am an elemental spirit summoned up from the Land of the Dead itself and given one purpose, one skill, one desire… TO DRIVE. Or, to change oil or adjust timing belts if no driving jobs are open.

Manuel Calavera: This deck of cards is a little frayed around the edges, but then again so am I and I’ve got fewer suits…

I’m pumped to see the classic make it back to the light, check it out! Purchase Grim Fandango now and be one of the first to replay the classic. $14.99 on Gog.

My hubby would have a blast with this game!