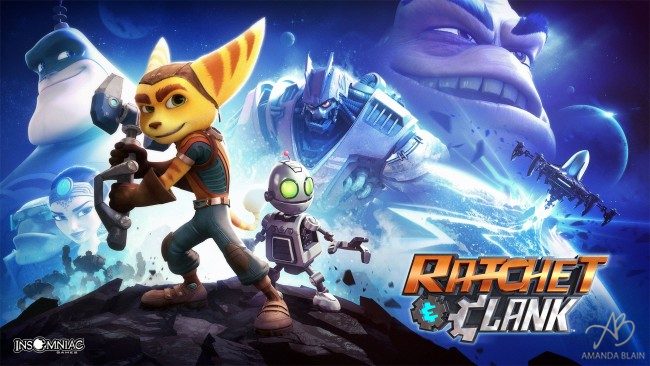 Lately we have seen a fair share of remakes in the video game world. From Final Fantasy 7 to Uncharted, remasters and remakes have become the norm. Ratchet and Clank from Playstation is the next in the line. Join Ratchet, Clank, Captain Qwark and new friends as they embark on anintergalactic adventure, and experience the start of an epic friendship (again) on PlayStation 4. This remake has been completely redone in time with the soon to be released movie of the same name – Ratchet and Clank on April 29 2016.

History Of Ratchet and Clank

For those not too familiar with the Ratchet and Clank series – a quick intro! The game was launched in 2002. It went on to become one of Playstations top selling games for the PS2 console selling 3.7 million copies. The platform game offers a wide range of weapons and gadgets that the player must use to defeat numerous enemies and solve puzzles on a variety of different planets in the fictional “Solana” galaxy. Ratchet is a Lombax, a fictional cat like character and Clank is a robot. The duo form a partnership to help stop Blargian Chairman Drek from his evil world destroying plan. This same game has been re-imagined for this 2016 release, with the intention of remaking the original game as if Insomniac Games were to make the game again today. There are also several tie ins to the film that is being released with the same name.

Graphics Of Ratchet and Clank

Ratchet and Clank is absolutely beautiful. It looks just like the animated film and has the same level of details and graphics. It’s come a long way from the original 2002 version. Even collecting the bolts from crate smash and foes looks totally stunning. This game does a fabulous job of showing exactly how beautiful the PlayStation 4 can be. Normally when you play a game the video cut scenes are on one level, but the actual game play is at another lesser level. This is not the case here. Beautiful animated cut scenes mix seamlessly (with a small load screen between) into live gameplay. Did I mention how pretty this game is? Seriously. Check out some of these amazing screen shots taken directly from the PS4.

Audio Of Ratchet and Clank

The voice acting is on point. It adds a lot to the various characters. The sound effect of squishing the bad guys or the various robotic devices used makes you feel a part of the game. There are so many witty one liners and frequent breaks of the ‘4th wall’. ie. The game is actually talking to you, about you, playing the game. “Play the game, based on the movie, based on the game.” There are constant references to video game culture and other franchises. Humorist elements like “Thankfully our hero found lots of ammo crates laying around” and “Check out my pre-order game confirmation email” will keep a constant smile on your face as you play through. The series is known for these little jokes, but there are lots of new fresh ones added. The story is narrated by Captain Qwark which gives a fun perspective and some small hints along the way of how to play the game.

Gameplay Of Ratchet and Clank

You play third person perspective, mainly as Ratchet, with Clank tagging along your back, but do get to play as the quirky robot a few times. The controls have been updated to make use of the Dualshock controller with a fast select on the D pad available for quick weapon select. You can now assign and switch between weapons much easier. Controls feel natural and are easy to learn. There is a wide range of new guns that have been added in, included quite a few from Ratchet & Clank Future : Tools of Destruction making an appearance. From the brand new Pixelizer (which transforms enemies into explosive8-bit pixels) to old favorites like the Groovitron which makes foes dance so you can squish them easily. You can upgrade your weapons with Raritanium that you acquire through you get from random drops and “shaking down” enemies  The upgrade screen is detailed and allows you to customize your character in the way you like to play.

What is New in Ratchet and Clank?

Some of the levels are familiar from previous game play – Novallis, Aridia, Pokitaru and Rilgar – but the new controls, guns and functions make it seem like a totally new world. There are some new planets, puzzle and flying areas – with many that tie directly into the movie.  There is also a new collectible card system called – holocards. You get these from secret areas, and rare drops. You can trade in duplicates for rare cards to help with your collections. Completed collections will allow you to unlock some playing bonuses like drop rates and the strength of your weapons.A good tip is that each weapon has its own unique Xp system. When one is maxed out you really should switch to a new one, to keep getting the most XP you can.

Some of the story has been changed from the original version to match closer to the Movie that is being released. Nothing feels strange or forced though. I don’t think fans will be offended by any of the changes, most will likely enjoy the additional back story and the elements that have been added.

Whether you’re a new or an old fan of Ratchet & Clank, this 2016 reboot of the series, which also coincides with a theatrical movie release, is packed to the gills with fun. There are tons of areas to explore, funny lines to hear and bad guys to destroy with neat weapons. The character’s in the game itself aren’t afraid to talk to the player and pokes fun at itself, at it’s own expense to garner a deeper connection to the player. Check it out I’m sure you will enjoy.

I received a press copy of this game for review. Thoughts are my own.