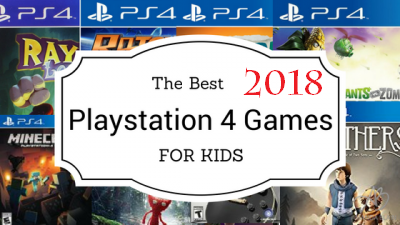 When it comes to selecting the best PlayStation 4 games for kids you have several things to keep in mind. This article will give you a place to start, a brief write up about what the game is and important details.  I have included the ESRB ratings but this are really just basic guidelines. Many kids today watch tv shows and movies that are not “approved” and many parents are OK with that. Video games are no different. Some children will be OK with fighting games and super bad guys. Others will not.  Keep this is mind when viewing the list below. Ultimately, it is up to you to decide which PlayStation 4 game is best for the kid in your life.

World of Final Fantasy is a cute game set in Universe of the Popular RPG Final Fantasy. If you are not familiar with it, thats ok. World of Final Fantasy is designed for younger kids (and adults) to get into the franchise. There are battles and some game mechanics that are needed, but nothing bloody or over the top. The game is VERY cute and is designed to be that way. The memorable legends of FINAL FANTASY come to life in this imaginative, colorful world as an epic story fit for the smallest of heroes unfolds.

There is no Co-op

Snoopy from Charlie Brown is in this side scrolling platform adventure through amazing environments, created in his imagination, as he tries to find Charlie Brown and all his friends. With Woodstock and the Beagle Scouts by his side Snoopy can unlock new abilities and performs special moves as he weaves his way through this magical journey.

2-player co-op splitscreen mulitplayer –  play as Snoopy and Woodstock at the same time!

Overcooked is a fun little cooking game for one to four players. Take an order and then work as a team to prepare and serve up the meal before the customers leave. Fast paced and fun with team work skills. But it gets tricky fast! Sometimes the kitchen will split in half from an earthquake, or icy slippery rivers appear to make things harder. This game is really designed for multiple players in the same room and can be a lot of fun for group play. Although you can play as single player, you will have to switch between 2 characters on screen which can be harder.

Up to 4 player On screen Co-Op play

Plants vs Zombie Warfare 2 is a fun multiplayer experience where the plants take on the zombies. The plants are funny and cute and the zombies are equally so. These are designed for children and not spooky. Help the plants reclaim their turf in the new 24-player Herbal Assault, or choose your side in 4-player co-op or solo play. his is a good introduction to player vs player shooting type combat, in a kid friendly environment. Plants vs. Zombies Garden Warfare 2 also introduces the Backyard Battleground, your very own interactive hub where you and up to 3 friends can take on daily quests and challenges and interact with your favorite characters.

There are tons of game play modes, so you can play online against others split screen on the same couch or solo by yourself.

Skylanders is definitely one of these games that the younger crowd can play. They include toys to life – meaning they come with small toy action figures that also appear on screen in the game. The game is basic enough, collect items and coins from boxes, attack some bad guys and progress through the various levels. You needs specific skylanders to open certain areas of the map. Sklanders Imaginators supports the 300+ character toys from all previous Skylanders games. In this version of Skylandersfor the first time, you can create your own skylander from your imagination!

2 players can play on the same screen at the same time.

Lego Worlds is an open environment where there are endless worlds pre-made of various Lego blocks. If you’ve payed Minecraft this is the Lego version of that.  Make your Lego Worlds come to life with customizable characters, both friendly and fearsome. Race, soar, zoom, and ride on a variety of vehicles and creatures from diggers and helicopters to horses and dragons.

There is couch split screen and also online multiplayer that allows two players to explore each other’s Worlds, play competitive challenges and show off creations.

Yooka-Laylee is an all-new open-world platformer. Explore huge, beautiful worlds, meet an unforgettable cast of characters and collect a vault-load of shiny collectibles as buddy-duo Yooka (the green one) and Laylee (the wisecracking bat with the big nose) embark on an epic adventure to thwart. Using their arsenal of special moves, our heroes will tackle a huge variety of puzzles and platforming challenges. Discover unique boss fights, mine cart challenges, retro-tastic Arcade games, quiz shows and more than 7 unique multiplayer games!

Portal Knights, is another type of Mincraft game, a cooperative 3D sandbox action-RPG! Level up your character and craft powerful gear to defeat your enemies in real-time tactical combat. Travel between randomly generated 3D sandbox worlds – Tactical action combat – RPG character classes to choose from and master – Epic boss battles – Random Events – Mine and gather resources from across the lands to craft your arsenal and supplies – Build your home with dozens of materials and furnishings. Think of it as a mroe advance minecraft, or to help your child try out new game genres like RPG.

You can play as a 2 play split screen on the game world, or go online and Join your friends in 4-person cooperative multiplayer. Work together on the same island to build structures, explore dungeons, and overcome the toughest perils.

If your child enjoys playing Minecraft, you can get them the new Minecraft story mode!  Set out on a quest to find The Order of the Stone if you are to save the world from oblivion. This game has some amazing voice talent in it by many actors and actresses you may know.  You choose the story and how it plays out by selecting various on screen options,  what you say to people (and how you say it), and what you choose to do in moments of thrilling action will make this YOUR story. Is an on screen choose your own adventure set in the world of Minecraft!

This is a single player game only. There is no co-op of any kind.

If you are looking for more something the whole family can play together , check out Hasbro family fun pack. It includes several board games you are familiar with in a fun online modern digital environment.  The Hasbro Family Fun Pack includes Monopoly, Scrabble, Trivial Pursuit and Risk all in one compilation!

You can play some of these games online as well as most in the same screen couch co op.

The Lego Dimendsions Starter Pack has everything you need to get started in Lego’s toys-to-ife game. Build the minifigure heroes and fire up the game to start the experience, then follow the in-game building instructions to assemble the loose bricks into the LEGO Gateway, and place the structure on the LEGO Toy Pad. There’s a whole multiverse of puzzles to solve, and challenges and enemies to face, and when you’re ready for more, collect Level, Team and Fun Packs to expand your collection.

Help Sonic the Hedgehog build an army to save the world. Just like hte old school classic, Sonic is back for a new generation. Play with blazing speed as Modern Sonic, catapult past perilous platforms as Classic Sonic, and create your very own Custom Hero Character equipped with a variety of powerful gadgets. Experience fast-paced action with these three unique gameplay styles, explore iconic stages, and fight across unique added content with Shadow as a playable character.

There is no multiplayer.

Have you and your friends been experiencing paranormal activity? Grab your Proton Pack and join the Ghostbusters as you explore Manhattan, blasting and trapping those runaway ghosts. Battle new and classic Ghostbusters characters, including Slimer, Gertrude Aldridge, Sparky and many more. This is an original story that takes place after the movie. Ghostbusting fun for the whole family as gamers of all ages and experience can dive right into the action.

Games for Teens and Older Kids

In a lush, post-apocalyptic world where nature has reclaimed the ruins of a forgotten civilization, pockets of humanity live on in primitive hunter-gatherer tribes. Their dominion over the new wilderness has been usurped by the Machines – fearsome mechanical creatures of unknown origin. If you are not sure which game to get your older child with a playstation 4, This one is it.

The Sims 4 is life simulator. You create a sim and help them live their lives in whatever way you see fit. Customize their homes, work, activities and every other part of their world. You have the freedom to sculpt Sims with tactile precision. Effortlessly construct the home of your dreams with the all new room-based Build Mode. Sims feel and express emotions. Earn new objects, outfits, and traits by completing events, discovering collectibles, and unlocking achievements.

You can share your Sims’ households with your friends and the community, but there is no co-op or multiplayer mode.
Purchase now from Amazon

Transformers devastation is a hack and slash your way through various levels. Players control one of five Autobots; Optimus Prime, Bumblebee, Sideswipe, Wheeljack, and Grimlock, as they battle against Decepticons and Insecticons who stand in their way. Each of the Autobots are able to use a variety of melee attacks and ranged weapons, and are able to transform into vehicle mode at any time. The game features multiple levels of difficulty, with more unlocked upon clearing the game multiple times. An additional Challenge Mode offers 50 stand-alone missions.

There is no multliplayer mode.

Overwatch is a game where 2 teams select a hero and battle it out. Team work is important and you will need to work together to win.  Join the ranks of a legendary force of soldiers, scientists, adventurers, and oddities known as Overwatch. Choose your hero and clash on the battlefields of tomorrow. Bend time, defy physics, and wield extraordinary powers in the ultimate team-based shooter. The fight for the future has begun. Take your place in Overwatch. Master the game within the game as both teams shift strategies and change heroes to try to gain the upper hand.  Every map has its own distinct feel with unique gameplay and team-based objectives.

There is online game play against strangers here as you need a team of 12 players. This is a game for older kids for that reason.

Fortnite is 2 games in one. A building save yourself from the end of the world mode, and an online 1 vs 150 player mode. . Lead the world’s remaining Heroes in the fight to save humanity and take back the world. Explore the large, destructible world where no two games are ever the same. Build huge forts, craft exotic weapons, find loot and level up your Heroes.

There is couch co-op as well as online multiplayer.

There you have it! The best Playstation4 games for kids in 2021.