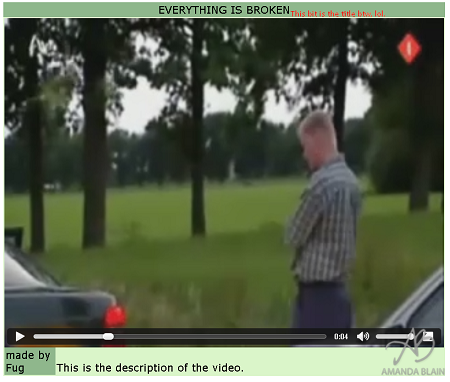 Soooo.. Randomly scrolling the Youtube section I came across a link to a group of folks on reddit who have decided that they are going to create their “own” youtube… without the “stupid G+ comment system”… O_o
I just had to look at this…

It was ridiculous. Some coder who doesnt code php…Randoms arguing among each other.. “Make it look like youtube 2009″… “NO 2010!” “NO WE ARE MAKING A SYSTEM FOR COMMUNITY AND ONE SITE FOR EVERYONE….” A screen shot of their first attempt located to the right. 🙂

Obviously this will go no where.  As a business owner,  there are so many parts to make a company run that the front user never thinks about. Google has negotiated massive content rights to allow videos on their site with proper credit, technology that scans new videos for that content, Storage space beyond comprehension, Bandwidth beyond comprehension, Servers and computers to host all that.. in High Def instant stream standards everywhere in the world.   Google never releases numbers on how much it costs to run YouTube.. or how profitable it is, at least not that i could find, So I’m not sure they care at all about less than 1% of the users who signed a petition for it to be ‘returned’… but why would anyone think to Google that when they can cut and paste a BoB tank and “DO THEIR PART”….. :/

I’m reaching the end of my patience on this commenting dealio.  If this is the worst thing that’s ever happened to you (having to create an account to comment) Welcome to life kids. Be prepared for much more serious issues in your hopefully, long, stress filled, full of disappointment, life. 🙂

I am Happy to say though, that I’m finally seeing people agreeing that G+ is in fact not empty.  It has become clear to anyone who looks,  that saying “Gplus is a ghost town and no one uses it” or “Only people hitting +1 a button use it count as active users on gplus”… Is no longer the acceptable thing to do with this current YouTube comment system. Naw, media, business, people…. Sorry.. you now must accept the reality, Gplus is full of people and what YOU are doing to interact with them, just hasnt been working. Don’t worry. Most plus people are nice and welcoming, because we remember it was a bit confusing in the start. Ask and you will get help.

Next phase … Gplus will slowly become more and more mainstream, businesses will start seeking help.. .and average users will start to get it. BRING IT.. I’m ready for it 🙂

What Video Game Are You Playing Right Now?